Hello everyone. I had a great time in Rouen, Normandy – the place where they make all that fantastic camembert cheese! I met up with a friend of mine who is currently doing his post doc at a nearby university and he showed me around downtown Rouen. He lives in the old part of town that holds a lot of history. He told me about the history of the town, showed me the square where Joan of Arc was burned at the stake, visited the local food markets and took me up to the lookout where you can view a panoramic view of the city.

Afterwards we were joined by a group of his friends and went out for dinner at a local place – La Petite Bouffe. I had a leek crumble with nuts and compté cheese, a grilled duck breast with carrots and potatoes followed by a wonderful salted caramel panna cotta for dessert. All for 19 euros! Oh, I also had an apertif of Kir (something that my friend recommended I try) which is blackcurrent syrup with white wine. Pas mal! (not bad). One major difference I noticed between the city of Rouen and Paris is that Paris feels international with the variety of people and ethnic backgrounds that live there. Not so much in the city of Rouen. However, the people of Rouen I found to be more friendly (which is usually the case in smaller cities).

I’ve used the phrase “Paris feels like a French New York City” (which people don’t find offensive – they love New York City). So here I was in the town of Rouen, asking the gentleman at the fromagerie and boucherie questions about their products and feeling quite comfortable. My french language skills are enough to get by but not good enough to have a full out conversation. But the vendors were more than happy to try to explain things to me. The town of Rouen is very pretty, with a lot of history, rolling hills, beautiful landscapes and the Seine River. We went up and took advantage of the sunny day (it rains all the time in Normandy apparently) and took in a panoramic view of the city. What a nice place! It was really nice to get away from the hustle and bustle of Paris and go somewhere more laid back. 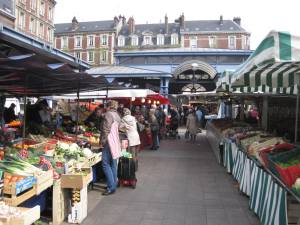 Having dinner with the locals was such a treat. Although I couldn’t follow the majority of the dinner conversation (as they spoke in French) there were parts that I did pick up or were able to contribute to thanks to a couple people who could speak English (another thing I noticed is that most people can speak basic-intermediate English in France. There are some other people who are a bit more advanced with their English – usually because they’ve had more opportunity to practice it). One thing that I noticed earlier in the day was that there are so many wonderful flower markets in Rouen (flowers are very affordable here too). My friend made a joke that it’s because everyone cheats in France so they have to buy flowers to say they’re sorry. He had me going for quite a bit because I had heard a rumour about open marriages in the past. I had always wondered if this was true or not because it is something that I had heard of (although I don’t know where I had originally heard this). So I took the opportunity to ask the local French people if having ‘open marriages’ was actually true in France or just a misconception. The answer…..

Having dinner with the locals

…it is, in fact, a misconception! They said it can happen, but it’s not really approved of just like anywhere else. It might be talked about it in the open more but it’s still not approved, whereas in North America it is very taboo to do or even talk about. They think the rumour might have stemmed from a philosopher who was visiting France (can’t remember his name) and somehow the idea spread to North America and it was considered posh. But modern day France is not like that.

Now, I don’t think a trip is really complete without having one truly local experience. Having said that I really should be careful what I wish for. What followed after dinner was a house party consisting of 30 people who lived in the city of Rouen. My friend really wanted me to come because it would be “such a great experience for me while visiting France other than the museums and food”. My friend who has been living in Rouen for 6 months, first found accommodations by CouchSurfing. It just so happened, that the day I was visiting Rouen, that a couch surfer he knew was throwing a party within the couch surfing community at his place. So the group of us made our way after dinner to his house where the party was happening. I don’t think I have ever seen so much wine and booze at a party before! I tried several (all good – and cheap too!) You can buy wine at the grocery store, corner store or department store starting at 4 euros and it all tastes decent.

I had a chance to talk to several people (most of whom could speak a bit of English) which was very nice of them. They didn’t mind speaking English to me at all. I asked them where they learned their English and most of them learned it in school or were born in other European countries where it was spoken. But there were others who also watched a lot of American television and sitcoms (How I Met Your Mother came into the conversation at one point). I had originally planned to catch the 7:05am train the next morning but that wasn’t going to happen. After several attempts to leave (the French are very hospitable) and a variety of phrases muttered by me – “Je veux couchez” which later became “Je veux dormir, Je doit dormir, Je veux allez maintenant” I finally left the party at 3am. They even explained the slight (but very important) difference between the verb coucher (to go to bed) and dormir (to sleep). Good information to know to avoid any possible misinterpretation! I didn’t get back to my friend’s apartment until 3am  – so much for catching the 7am train the next morning. That’s okay. Pas de problème. I can just catch the next one. But what a great experience it was! The people from Rouen know how to let loose and have fun (and they are all so friendly). What a great memory to have of France.

2 thoughts on “My weekend in Rouen”