Today started again with an early start of getting out of the apartment at 7am to get to class. Today’s class at Cordon Bleu consisted of a 1 day course called “Cooking for Friends”. It consisted of a 3 hour demonstration of three different recipes (an appetizer, main and dessert) followed by the practical component where you would learn how to cook the main course that was demonstrated in the morning in the Cordon Bleu kitchens.

The morning demonstration was interesting and entertaining led by a dashing chef by the name of Chef Patrick Caals whose theatrical flair and dry sense of humour was quite an interesting way to bring in the day. His interpreter, however, looked like she had experienced quite a late evening the night before and at one point even left the classroom momentarily at which point, the chef started speaking in English since he was ‘sans translator’.

So today in the practical part of the “Cooking for Friends” course we got to actually cook in the kitchens at Cordon Bleu! The building and classrooms/kitchens are surprisingly small for such a famous institute. There were 10 of us in the cooking lab, all sharing a common work bench that ran along the length of the room with burners and ovens along the walls. My first observation: They use electric burners and not gas (ironic for Cordon Bleu, isn’t it?). Apparently the building is either too old or can’t be set up for gas.

My second observation: This really is a ‘fun class’ because there are two chef’s assistants who are handing us equipment as we need it, cleaning up after us and making sure our sauteed vegetables and potatoes don’t burn while we’re intently trying to gut and fillet a fish. That’s right – I learned how to take a whole fish today and fillet it! It’s actually something that I have never done nor have ever had any inclination to do. I think the chef translator noticed my face (as well as the other students around me) because she said “You signed up for this class!” One of the chef’s assistants was kind enough to offer to take pictures of me during the class. Thank goodness, because the last thing I want are fish guts on my camera. 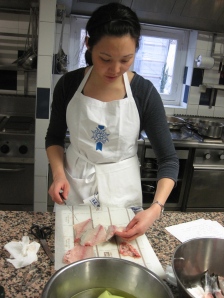 After class I talked with one of the full-time students and learned that the program (for either culinary or pastry) consists of 3 semesters which are 3 months each. Which means, students graduate from Cordon Bleu in 9 months. Wow – that seems fast considering that tuition for Cordon Bleu is around 24,000 or 18,000 euro (for either the culinary or pastry diploma respectively) or 40,600 euro for the grand diploma (both culinary and pastry). From being in the school for the past two days I notice that the students are from all around the world (I’ve seen Spanish, Mexican, Chinese, Japanese, French, British, Australian, American) and they can all speak French for the most part (or French and English). It is truly amazing.

However, after today’s cooking classes, I realize that the new George Brown culinary campus in Toronto really has state of the art facilities including gas and induction burners (except George Brown doesn’t have designated dishwashers – too bad).

I also made another Cordon Bleu friend today. Sitting in the stands next to me this morning was an American woman from Houston, Texas who came to Paris for a month for the sole purpose of attending workshops at Cordon Bleu (similar to me, attending Cordon Bleu was on her bucket list). It turns out that she also did the market tour and demonstration class with me yesterday (but was in a different group) and was taking an afternoon workshop on “The Secrets of Macarons“. We agreed to meet up after our respective classes and trade each other’s items so we would both have an entrée (sea bream) and dessert (macarons) for dinner tonight. It pays to make friends at Cordon Bleu. She was also telling me how her chef mentioned that she could get a list of  stores that carry specific ingredients (ie. gold shimmer powder) that they used in their macaron class. Turns out this ‘list’ is actually a printed booklet that Cordon Bleu gives to all its students and lists kitchen equipment and supply stores, restaurants, chocolateries, bakeries and markets around the city (so their students know where to find specific ingredients or food items). We both requested copies from the front desk as we left. Sweet!